Randy's Donuts is a bakery and landmark building in Inglewood, California, near Los Angeles International Airport, in a style that dates to a period in the early 20th Century that saw a proliferation of programmatic architecture throughout Southern California. This style had its heyday from the mid-1920s to the mid-1930s. By the 1950s however, the trend of designing structures in the shape of the product sold there had changed to focus on signs rather than architecture itself. In the case of Randy's, the product in question is represented by a giant doughnut on the roof of an otherwise ordinary drive-in that is a dedicated doughnut bakery. The building was designed by Henry J. Goodwin. 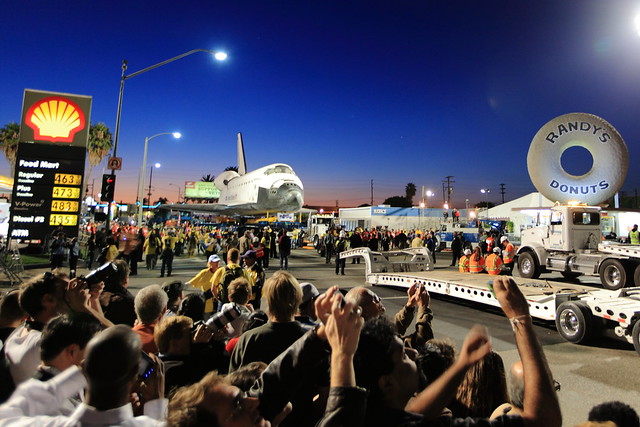 There are actually two different sized doughnuts. Most locations used a 32 1/5 ft (9.8 meters) in diameter version that straddles the building and is aimed at the intersection. In "Roadside Giants" by Brian and Sarah Butko, the Weintraubs climbed on top of the doughnut with a tape measure and confirmed this for the authors. The Bellflower and Reseda locations, however, feature a small version of the doughnut on a pole out in front the building. This may be 23 feet (7 meters) in diameter, as is widely reported.
The 24-hour drive-in is located at 805 West Manchester Boulevard where it intersects with La Cienega Boulevard, and is near the Manchester Boulevard off-ramp of the San Diego Freeway (I-405).