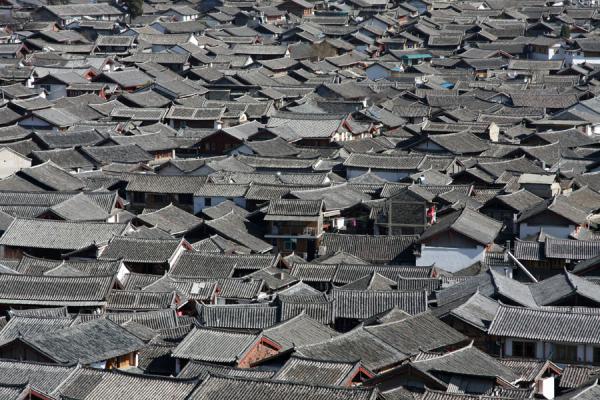 The Old Town of Lijiang, a well-preserved old city of ethnic minorities with brilliant culture, is a central town of the Lijiang Autonomous County of the Naxi Ethnic Minority in Yunnan Province. Located on the plateau which is 2,400 meters (7,874 feet) above the sea level and embraced by the tree-covered Lion Mountain in the west, Elephant and Golden Row Mountains in the north, vast fertile fields in the southeast and crystal clear water running through, the old town looks like a big jade ink slab, therefore got the alias the Town of Big Ink Slab (Dayanzhen).

The Old Town which occupies an area of three point eight square kilometers (912 acres) was firstly built in the late Song Dynasty and the early Yuan Dynasty and has a history of more than 800 years. Since Kubla Khan who is the first emperor of the Yuan Dynasty set his reign here, Lijiang was on a fast developmental way and became the political, cultural, and educational center in this area, playing a very important role in the trading activities among Yunnan, China hinterland, Tibet, India and many other Asian countries. Till now, when walking on the streets of the Old Town, one can feel the prosperity and flourish from the shops with fancy and superb collections of handicrafts.

The Old Town is built along the lie of mountains and the flow of rivers, providing a very precious sample of the research on the old-time architecture. The unique geographical location, historical background and multiracial inhabitants make it one of the most special. The Old Town is the only old city built without a city wall and there is an interesting story telling the reason. Lijiang had been under the reign of the hereditary Mu family for more than 500 years. If the Chinese character 'Mu' (represents the governor of Lijiang) is put into a frame (represents the city wall), you have the character 'Kun' which means 'siege' or 'predicament'. This would mean that the governing Mu family and their descendants would always be trapped like a rat in a hole. Because of this symbolism, the Old Town was never given a city wall.

As a result of the combination of the multinational culture and the progress of Naxi ethnic minority, the buildings here incorporate the best parts of the architectural traits of Han, Bai, and Tibet into a unique Naxi style. The layout of the town is free-style and flexible, the houses are close and diverse, and the lanes are narrow and meandering. Naxi people pay much attention to the decoration, the commodious and applied houses are mostly timber and tile structure compound with a garden, each has engraved vivid figures of people and animals on doors and windows, beautiful flowers and trees in the garden.Living in such a beautiful and comfortable environment is a real pleasant thing.

The old Town of Lijiang is a city depends on water for existence and water is just like its blood. Black Dragon Pool (Heilongtan) is its main water source and subdivides into many streams which can reach every family and every street there. Due to the reticular aqueducts, willow trees grow everywhere and there are almost 350 varied and inimitable bridges in the little town, some of which were built in the Ming and Qing Dynasties. The usage of the water created by the local people is very scientific. They build three mouths every well from the upriver to the downriver. The water in the first mouth is for edibility, the second one is for cleaning of the vegetables and fruits, and the last one is used to wash the clothes. The water not only meets the need of the dweller, but also gives the town a beauty of gentle. The town reputed as the 'Oriental Venice' and 'Suzhou in Highland', but it is much, much more than this. Once you have visited this Old Town, it will capture your heart for the rest of your life.

The center of the Old Town is the Square Street (Sifangjie). Four main streets radiate from Square Street and extend to the four different directions. Countless lanes extending in all directions form a network and connect every corner of the town. Streets are paved by the local bluestones which are neither muddy in the rainy season nor dusty in the dry season. The massive and fine-grained stones add a sense of antiquity and mystery. The sluice at the center is opened late in the night and the resulting current of water flushes and washes all the streets to keep the town clean. This practical use of water is part of the daily life of the residents in Old Town.

On December 3rd, 1997, the Old Town of Lijiang was put in the list of the World's Relics by the World Cultural Heritage Commission of the UNESCO (United Nations Educational, Scientific, and Cultural Organization). The charming Old Town is now a famous tourist attraction for its traditional ethnic culture and customs, inimitable buildings and the wonderful natural views.