Powerscourt Estate (Irish: Eastát Chúirt an Phaoraigh), located in Enniskerry, County Wicklow, Ireland, is a large country estate which is noted for its house and landscaped gardens, today occupying 19 hectares (47 acres). The house, originally a 13th-century castle, was extensively altered during the 18th century by German architect Richard Cassels, starting in 1731 and finishing in 1741. A fire in 1974 left the house lying as a shell until it was renovated in 1996.
Today the estate is owned and run by the Slazenger family. It is a popular tourist attraction, and includes a golf course, an Avoca Handweavers restaurant, and an Autograph Collection hotel. 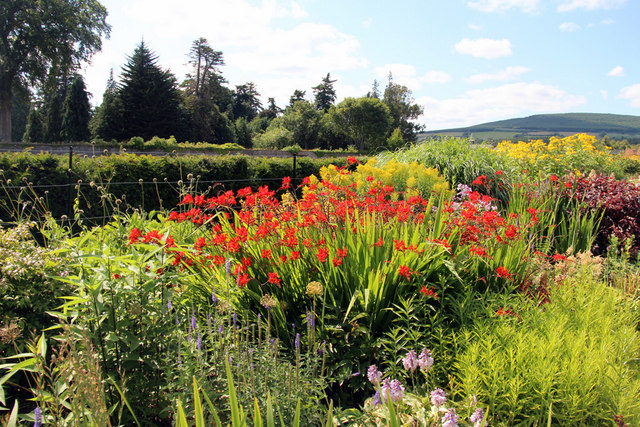 Powerscourt Waterfall and its surrounding valley are also owned by the Powerscourt estate, although the two pieces of land are no longer directly connected. At 121 metres, it is the highest waterfall in Ireland. In 1858, the seventh Viscount Powerscourt established a deer park around the waterfall, resulting in the successful introduction of the Japanese Sika to Ireland.
Regular bus service from Powerscourt to the waterfall was discontinued in 2005, though during the high summer season, intermittent bus services are still available. The waterfall is seven kilometres from Enniskerry, and walkable. While the distance is not prohibitive, walking can be dangerous, as the road is narrow, and lacks a shoulder for long stretches.
A separate entrance fee is required for access to the waterfall, ranging from €3.50 (children) to €5.50 (adults).