Hangzhou, capital of Zhejiang Province 180 kilometers southwest of Shanghai, is the center of politics, economy, culture, and communications of the province.

First built as a county during the Qin Dynasty some 2,100 years ago, Hangzhou became prosperous after the building of the Grand Canal in the Sui Dynasty (581-618). The city was the capital of Wuyue State (893-978) during the Five Dynasties Period and of the Southern Song Dynasty (1127-1279). It is one of the six famous ancient capitals of China. (The other five are Beijing, Nanjing, Xi'an, Luoyang, and Kaifeng.)

Hangzhou has been called a "paradise on earth," with its picturesque West Lake and its many other world-famous sites. It is also noted for its silk industry, which has existed since the seventh century and still flourishes today. 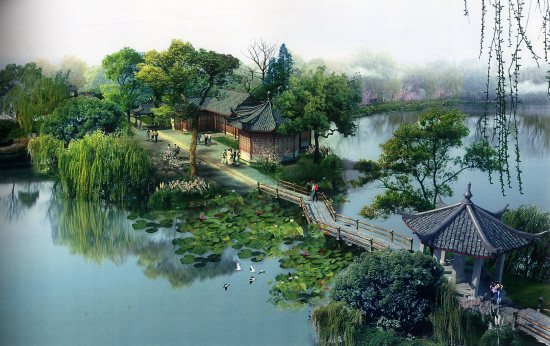 Hangzhou is renowned as China's "paradise on earth" owing to its beautifully crafted landscape. West Lake was created after the Chinese love for garden-style parks for recreation. West Lake is a place of tranquility where urbanity becomes a silhouette on the northeast horizon and mountains near and far surround it on the other three sides. The occasional pagoda and Chinese-style arched bridge add atmosphere to the tree-lined walkways, verdant islands, and hills.

This lake, lying to the west of Hangzhou, is the most beautiful of the thirty or more lakes in China which bear the same name. Once a small bay at the mouth of the Qiantang River, it was separated from the sea by river sediment to became a lake. The lake with its islands covers approximately six square kilometers. The charming Solitary Hill Islets (Gushan) rises above the water in the north part of the lake, which is bordered by hills on three sides. The Su Causeway runs roughly north and south and the Bai Causeway east and west. The lake has several segments called the Inner Lake, the Outer Lake, Yue Lake, West Inner Lake, and Small South Lake. There are three islands in the Outer Lake: Three Pools Mirroring the Moon (Santan Yunyue), Mid-Lake Pavilion (Huxinting), and Lord Ruan's Mound (Ruangongdun).