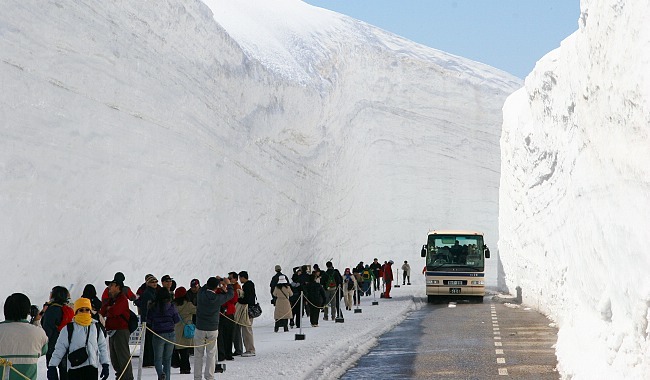 Tateyama Report - October 16, 2014
Tateyama Route Report - September 29, 2014
The Tateyama Kurobe Alpine Route (館山黒部アルペンルート, Tateyama Kurobe Alpen Route) is a unique and spectacular route through the Northern Japan Alps which is traversed by various means of transportation including cablecars, trolley buses and a ropeway. Completed in 1971, the route connects Toyama City in Toyama Prefecture with Omachi Town in Nagano Prefecture. The section between Tateyama Station and Ogizawa is closed to private vehicles. It is completely inaccessible from December to mid April.
In 2014, the Alpine Route is open from April 16 to November 30. The section between Tateyama Station and Midagahara already opened on April 10.

The main attraction of the Tateyama Kurobe Alpine Route is the magnificent scenery of the Tateyama Mountain Range, part of the Chubu Sangaku National Park. Visitors can enjoy varying vistas during different seasons of the year. In spring, accumulated snow, especially around the upper sections of Midagahara and Murodo, form a majestic snow corridor whose snow walls reach up to 20 meters high. A section of the snow corridor around Murodo is open to pedestrians usually from mid April to mid June. In 2014, the snow corridor is open to pedestrians from April 16 to June 22.
Summer and autumn attract visitors with beautiful landscapes, alpine flowers (especially around June through August) and autumn leaves. The fall colors typically reach their best around Murodo and Daikanbo from late September to early October, and they gradually descend the mountain slopes, arriving at the lower elevations from late October to early November. 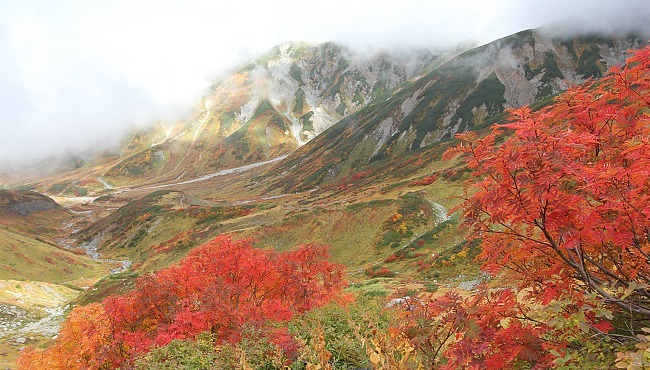 Autumn colors can be seen along the Alpine Route from late September into early November
The highest point along the route, Murodo offers a variety of hiking trails that cater both to serious hikers and to those looking for a leisurely walk. Other highlights along the route are the single-span Tateyama Ropeway that provides great panoramic bird's eye views of the surrounding mountain scenery, and the 186 meter tall Kurobe Dam which is especially spectacular when it discharges water between late June and mid October.
From mid June through September temperatures along the Alpen Route are mild, and it rarely gets too hot either. From April to early May and from mid October through November, temperatures are cool and it might get chilly on windy days. Just one layer of clothing is enough for summer, while an additional sweater or jumper is recommended for spring and autumn. Good walking shoes are advised if you plan on hiking beyond the easy walking trails in the vicinity of respective stations along the route. Accommodation in form of hotels, mountain huts and camp grounds is available along the route, especially around Murodo. 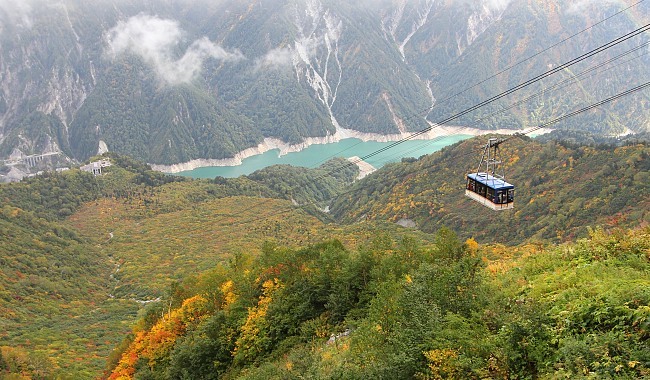 Tateyama Ropeway
The following is a list of transportation and attractions along the Alpine Route, in order from west to east: