Shenzhen Safari Park is located in the north of the city, on the bank of the beautiful Xili Lake. The zoo combines animals, plants and animal performances, and is the first to uncage animals in China. More than 300 breeds of animals live here. Many of them are rare animals in the world or national protected animals in China. Pandas, giraffes, Asian elephants, red-crowned cranes, Siberian tigers and flamingos all could be found in this park. 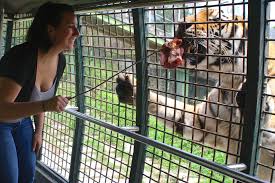 With green mountains to the north as its barrier, the Safari Park is like a bright pearl in the bustling metropolis. The zoo, occupying an area of 120 hectares (296.5 acres), has three parts according to the living habits of different animals. Visitors can take buses to watch the uncaged animals strolling on the lawn. In the adventurous beasts' zone, white tigers (Bengal tigers), North China tigers (Siberian tigers), South China tigers, bears, wolves, lions and cheetahs, all have their own homes. In China, a saying goes that 'one mountain cannot have two tigers', but in the Chinese Liger Hill, tigers and lions live harmoniously with each other. Here, visitors find the only tiglon in the world and rare ligers. The South China tigers show the mien of Chinese tigers. Giraffes, flamingos, zebras, kangaroos, camels, hippopotamuses, swans, pandas and other vegetarians inhabit the vegetarian zone. This area has the largest swan lake in China. Visitors can float in this lake to appreciate the graceful black and white swans. Considered the national treasures of China, the pandas are also well worth viewing.

In the animal performance zone, wonderful performances are awaiting the visitors. The red orangutans, the closest animal to human beings, come from India. They even serve as salesmen, cooperating with the parrots as cashiers and elephants as porters. Every day, the zoo holds about ten animal performances in the four animal performance halls, namely, the Circus Hall, the Elephants and Tigers Show Hall, the Sea lion Performance Hall and the Birds Performance Hall. The grand party for hundreds of birds can not be seen in other parts of the world. Another exciting performance played by more than 300 actors and about 1,000 animals is also a pioneer in the world. The elephants act as the leaders of the parade, with tigers, lions and other animals following behind and clouds of pigeons hovering in the sky. 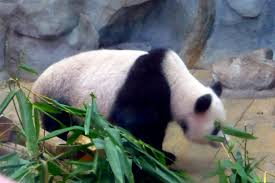 The Zoological Center in the northwest of the zoo is the largest in China introduces knowledge about animals. Visitors get familiar with the colorful animal world by watching specimen and pictures or simply using the Multimedia Touch Screen.

In addition, the Ocean World in the park is definitely worth a visit. There visitors can see many kinds of sea creatures such as spotted dolphins, sea lions, black fin sharks, white fin sharks and lemon sharks. Meanwhile, the musical drama ‘Happy Ocean’ featuring acrobatics in mid air, high diving and sea animal performances will take your breath away.