When walking on the ancient streets of Lijiang Old Town, you will undoubtedly hear the wonderful Naxi (also spelt Nakhi and Nahi) Ancient Music, the traditional Naxi classical music that is regarded as a 'living fossil of Chinese music.'

Naxi people must enjoy special favor in the eyes of the divinity, for they seem to be born with artistic qualities and poetic minds. Great talents in the areas of poetry, calligraphy, painting, and music have all come from this rich and captivating culture. 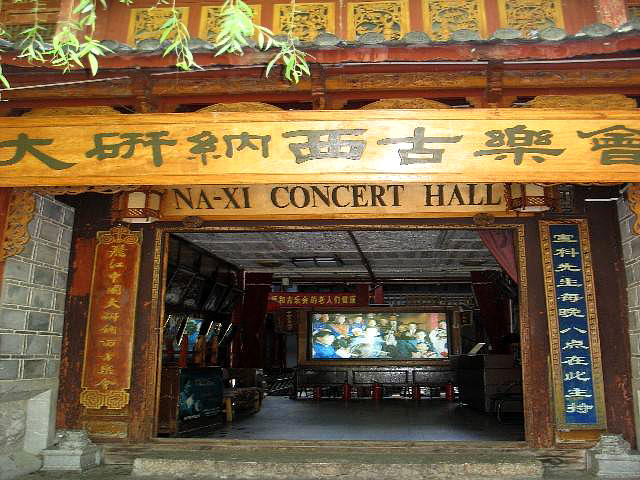 A crystallization of Taoist rite, Confucian ceremony, and the literary lyrics, poetic topics and musical tones of the Tang, Song and Yuan Dynasties, Naxi Ancient Music has developed its own unique style and traits - the result of 500 hundred years of evolution. It originally included three parts -'Baisha Fine Music' (Baisha Xiyue), 'Dongjing Music' (Dongjing Yinyue), and 'Huangjing Music' (Huangjing Yinyue), the last of which has long been lost in the river of time. Played on venerable Chinese musical instruments such as flute, shawm, Chinese lute, plectrum, and zither, the special music has the power to cleanse the heart and relax the mind.

Baisha Fine Music: It is said that Baisha Fine Music was an honoraria from the first emperor of the Yuan Dynasty-Kublai Khan. When this brave conqueror was on his expedition to Dali, which is not far from Lijiang, he met danger while crossing the Golden Sand River and received help from Mailiang, the leader of the Naxi people. To show his pure-hearted appreciation, Kublai Khan left half of his band and many musical scores as a gift before leaving. Baisha Fine Music is one of ancient China's few large-scale, classical orchestral forms of music and has 24 'qupai' (tunes) which are archaic, simple and elegant in style, and exquisite, euphonious and energetic in character.

Dongjing Music: This is a type of Taoist music which was introduced to Yunnan from the central Plains during the Ming and Qing Dynasties. Deeply rooted and widely spread among the Naxi people, it became the most well-preserved musical form in all of China. Besides its intrinsic stateliness, purity and elegance, Dongjing Music incorporated the local musical elements, styles and the skills used in performances of the Naxi ethnic group-creating a feeling of transcendental artistic conception and charming folk flavor which can be easily appreciated. It was originally an enjoyment reserved for the noble class, but these shackles were eventually broken because of the Naxi people's passion for music. At least four unabridged orchestras exist in and around Lijiang, and these characteristic bands are famous for their 'three-olds': first, old men (most of the players are over 70 years old); second, old musical instruments (many are antiques dating back more than 100 years, some of which can not be seen in other places); third, old songs (all are antiquated classical music). Members of the bands are drawn from all kinds of occupations including teachers, artisans, farmers, butchers, clerks, etc. Naxi Ancient Music Bands have been invited to perform in Hong Kong, Great Britain, America, Holland, Belgium and Norway, exercising great influence and gaining attention from all over the world.
Generations of national musicians devote themselves to Naxi Ancient Music and make it a part of Naxi culture. Music can represent a nation's spirit and offer a better way to know the people who play and enjoy it, so take the opportunity to hear it; it is guaranteed to be an unforgettable life experience.