Occupying an area of 23,300 square meters (about 5.8 acres), the Lingering Garden is located outside Changmen Gate in Suzhou, Jiangsu Province. Originally a classical private garden, it is one of the four most famous gardens in China. Possessing typical Qing style, it is well-known for the exquisite beauty of its magnificent halls, and the various sizes, shapes, and colors of the buildings. In 1997, it was recorded on the list of the world heritage by UESCO.

With a history of more than 400 years, the Lingering Garden has changed hands several times. Each owner did his best to perfect it. The garden was first built in 1593 during the Ming Dynasty (1368 - 1644) by a retired official named Xu Tai. During the Qing Dynasty (1644 - 1911), it was bought by Liu Shu. As a calligraphy lover, he carved masterpieces on both sides of the corridors of the buildings. He had also collected unusually-shaped stones in the garden. The succeeding owners followed his model when doing restoration work. Almost demolished in the 1930s, the garden was repaired sponsored by the government and then opened to the public. 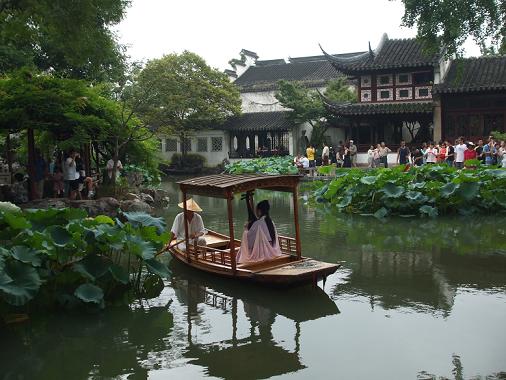 Like other famous gardens in Suzhou, the Lingering Garden seeks to create stunning natural landscapes within limited space. In it, domiciles, ancestral temples and private gardens are included. Buildings, trees, and flowers blend harmoniously with their surroundings. The garden can generally be divided into four parts: the central, eastern, western and northern parts according to the style of the buildings. Of the four parts, the central part is the essence of the whole complex. This part was the original Lingering Garden while the other three were added during the Qing Dynasty. After going through winding corridors from the gate, one reaches the central part. The central part is divided into two parts: the western part and the eastern part. The former features in pools and hills while classical buildings dominate the latter. The Celestial Hall of Five Peaks in the eastern part is the largest hall in the garden. The western part is enchanting for its natural scenery. It is a large rockery built from stacked stones and soil during the Ming Dynasty. Maples cover the hill. When all the leaves turn red in autumn, it is extraordinarily beautiful. The northern part used to be a vegetable garden, but now is used to exhibit potted plants of which the Suzhou people are quite proud.

These four parts are connected by a 700-meter (about 0.4 miles) long corridor on the wall of which calligraphy carved on the stone can be found.