The beautiful waterside City of Suzhou in Jiangsu Province in South China is most famous for its elegant classical gardens. Among these, the Humble Administrator's Garden, covering about 52,000 sq. meters (12.85 acres), is the largest and most renowned. Due to its unique designs and ethereal beauty, the garden has garnered many special honors. It is listed as a World Cultural Heritage site and has also been designated as one of the Cultural Relics of National Importance under the Protection of the State as well as a Special Tourist Attraction of China. Along with the Summer Palace in Beijing, the Mountain Resort of Chengde in Hebei Province and the Lingering Garden in Suzhou, it is considered as one of China's four most famous gardens. No other classic garden in the country has been honored more than this one.
The Humble Administrator's Garden was originally built in 1509 during the Ming Dynasty (1368-1644). It was initially a private garden of a former government servant named Wang Xianchen. It was said he intended to build a garden after retired and just do some gardening work like planting trees and vegetables there, which was said to be the life of a humble man by him. Hence is the name of the garden. The garden was created upon the old relics of a resident and a temple. Water feature is the main background and its natural landscape includes small forests, hills and rock formations. It also has man-made pavilions, halls and parlors. Unlike the Grand View Garden and other famous gardens in Beijing, it is representative of the Ming Dynasty building style. 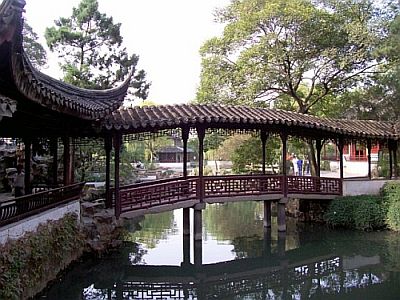 The garden consists of Eastern, Central and Western sections as well as some residences of the former owners. The resident houses are typical of the style of Suzhou Local Residences, whose feature can be seen in the famous water township Zhouzhuang not far from Suzhou City. The site of the residences has been rebuilt as the Garden Museum now.
Eastern Section
The Eastern Section is dotted with sheer hills, green grasses, dense bamboo and pine forests and winding streams. The main building is the Cymbidium Goeingii Hall (Lanxiang Tang). Its south wall has a panoramic map of the entire garden. Another impressive structure is the Celestial Spring Pavilion (Tianquan Ting), which gets its name from an ancient well inside whose water tastes very sweet.

Central Section
The Central Section is the truly elite part of the garden, with one-third of its area covered by water. It is lined with exuberant trees and elegant parlors. Pavilions and courtyards are clustered throughout. The Hall of Distant Fragrance (Yuanxiang Tang) is the main building that is named after a lotus pool nearby. When the summer comes the pool is filled with lotuses and the heady fragrance wafts into the building. The hall is designed with oversized glass windows on all sides for easy viewing. Nearby is the Small Flying Rainbow Bridge (Xiaofeihong), a rare type of bridge and the only one in the garden you can walk across.

Western Section
The main building in the Western Section is a stately and ornate hall which is divided into two by a massive screen. The south part is 18 Camellias Hall (Shiba Mantuoluohua Guan) and the north part is the 36 Pairs of Mandarin Duck's Hall (Saliu Yuanyang Guan). In a nearby pool where the ducks were fed, stands an octagonal Pagoda Reflection Pavilion (Taying Ting); there is an optical illusion here - it appears as if a pagoda was lifting when all we actually see is the reflection of the pavilion.
In recent years, the Humble Administrator's Garden has been the site of many floral exhibitions. Every spring and summer, the Azalea Festival and the Lotus Festival are held here. There are bonsai shows in the aptly named Bonsai Garden (Penjing Yuan) in the Western Section while precious Chinese stones are shown in the Elegant Stone House (Yashi Zhai) in the Central Section.

Admission Fee: CNY 90 (April, May, July, August, September and October)
CNY 70 (January, February, March, June, November and December)
Opening Hours: 07:00 to 17:30 (March 1 to November 15)
07:30 to 17:00 (November 16 to the end of February of next year)
Bus Route: take bus no. 40 or 313 and get off at Beiyuanlu Station
Suzhou Bus Search
After touring the garden, you may want to visit Suzhou Museum, a popular local museum famous for its abundant and rare cultural relics of Ming and Qing dynasties. Besides, Lion Grove Garden is a famous classical garden of a different style.