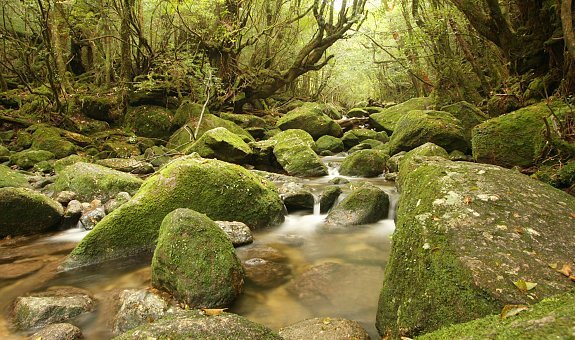 Yakushima is a subtropical island off the southern coast of Kyushu and part of Kagoshima Prefecture. It is covered by an extensive cedar forest that contains some of Japan's oldest living trees. Trees more than 1000 years old are affectionately called yakusugi (a combination of Yakushima and sugi, the Japanese word for cedar), the most ancient of which may be over 7000 years old.

The island's cedar forests were logged extensively in the past, particularly during the Edo Period for the production of cedar shingles. Today the forests have well recovered from past logging and are a national park, while some areas were declared a Natural World Heritage Site in 1993. Most tourists come to the island to hike through the forests and see the ancient cedar trees.

As a subtropical island with nearly 2000 meter high mountains, Yakushima attracts a lot of rainfall around the year, with a local saying claiming that it rains "35 days a month". While that may be an exaggeration, there is some rain almost on a daily basis, especially in the mountainous interior, although the rain can also be light and limited to short periods of time. In higher elevations the precipitation falls as snow during the winter months.