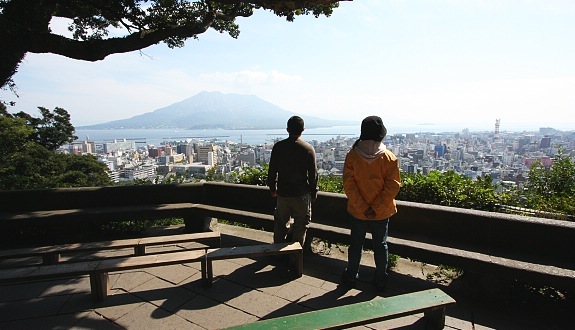 Tourists admire Sakurajima, Kagoshima Bay and the city from the Shiroyama Observator

Shiroyama Park (Shiroyama Kōen) is a park in downtown Kagoshima that extends over Mount Shiroyama. With an elevation of 107 meters, the mountain formerly served as the site of a castle fortification, which led to its name. Shiroyama literally means "castle mountain" in Japanese. The castle's former grounds at the base of the mountain now serve as the site of the Reimeikan Museum.

The park is most famous for its Shiroyama Observatory with spectacular views over downtown Kagoshima, Kagoshima Bay and Sakurajima. The night view is also nice, particularly if a clear sky and bright moon allow Sakurajima to remain visible. Nice views can also be enjoyed from the Satsuma no Yu outdoor hot spring bath at the nearby Castle Park Hotel, which is also open to non-staying guests.


Furthermore, the park will hold the interest of travelers interested in Japanese history, as it was the site of the final battle of the Satsuma Rebellion in 1877. The local hero Saigo Takamori is said to have made his last stand at Saigo Cave, located within the park.