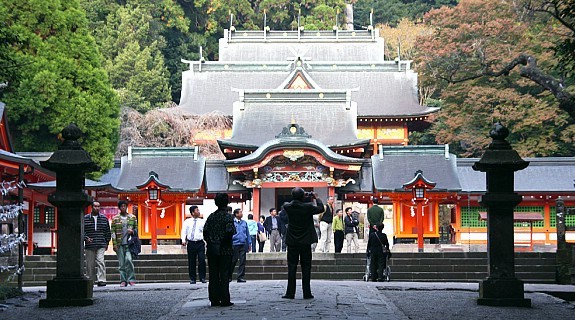 The mountains of Kirishima are an important site in the creation mythology of Japan. It was in this area that the god Ninigi no Mikoto, grandson of the sun goddess Amaterasu, is said to have descended from heaven to rule over the earth.

Ninigi no Mikoto landed on nearby Mt. Takachiho-no-mine bringing with him the three imperial regalia: the sword, the mirror and the gem; symbols of the imperial family. He eventually married a local princess, becoming mortal in the process, and established the lineage of Japanese Emperors.

Devoted to Ninigi no Mikoto, Kirishima Shrine was built during the Muromachi Period on a different site from where it stands today. Since then it has been destroyed numerous times by volcanic eruptions, but always rebuilt. The current shrine was constructed in 1715 where it survives to this day. Its large, beautiful buildings are surrounded by forest and have been declared important cultural property.