The Palace of Versailles or simply Versailles, is a royal château in Versailles in the Île-de-France region of France. In French, it is known as the Château de Versailles. 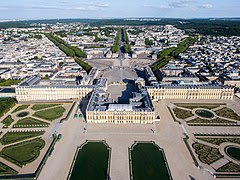 When the château was built, Versailles was a country village; today, however, it is a wealthy suburb of Paris, some 20 kilometres southwest of the French capital. The court of Versailles was the center of political power in France from 1682, when Louis XIV moved from Paris, until the royal family was forced to return to the capital in October 1789 after the beginning of the French Revolution. Versailles is therefore famous not only as a building, but as a symbol of the system of absolute monarchy of the Ancien Régime.

The earliest mention of the name of Versailles is in a document dated 1038, relating to the village of Versailles. In 1575, the seigneury of Versailles was bought by Albert de Gondi, a naturalized Florentine, who invited Louis XIII on several hunting trips in the forests surrounding Versailles. Pleased with the location, Louis ordered the construction of a hunting lodge in 1624. Eight years later, Louis obtained the seigneury of Versailles from the Gondi family and began to make enlargements to the château. This structure would become the core of the new palace. Louis XIII's successor, Louis XIV, had it expanded into one of the largest palaces in the world. Following the Treaties of Nijmegen in 1678, he began to gradually move the court to Versailles. The court was officially established there on 6 May 1682. 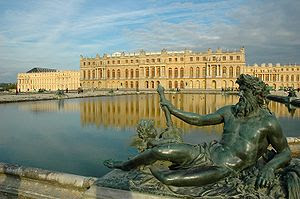 View of the Palace from the garden

After the disgrace of Nicolas Fouquet in 1661, Louis confiscated Fouquet's estate and employed the talents of Le Vau, Le Nôtre, and Le Brun, who all had worked on Fouquet's grand château Vaux-le-Vicomte, for his building campaigns at Versailles and elsewhere. For Versailles, there were four distinct building campaigns.