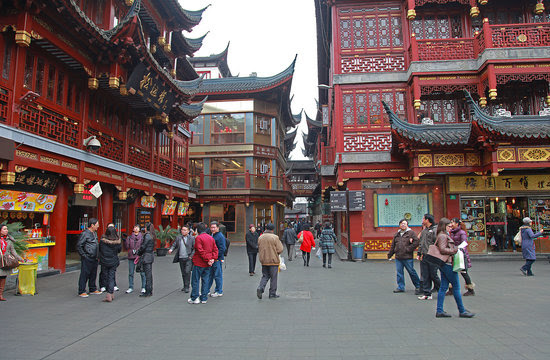 Shanghai Old Street, historically called Miaoqian Dajie, is an old business street that has a combination of tourist attractions, shops, entertainment and cultural exhibits. It owes its special social attractions and rich commercial background to the fact that the earliest bank, gold shop, jeweler's store, wine shop and tea house of the city were all to be found here.
The architecture and the layout of the shops in this street show its development that began during the Ming Dynasty (1368-1644) until the period when European influence made an impact on the city. The western part of this old street begins at South Henan Road and continues to Guanyi Street. The buildings here reflect the style of the Ming and Qing (1644-1911) dynasties and the architecture is elegant in its classic simplicity. Red poles, pink walls and black roofs with upswept eaves are in harmony with the buildings in Yuyuan Garden. The eastern end of the street, with a length of 500 meters (about 1640 feet) ends at Renmin Road and after reconstruction and decoration retains the residential characteristics of later Qing Dynasty. The swing doors reach to the ground, the lattice windows and the graceful roofs with upswept eaves are fascinating as they are precisely how foreigners imagine China to be. Although there are several European buildings, they don't contradict the styles of old Shanghai. On the contrary, they are a vital part of the diverse culture here. 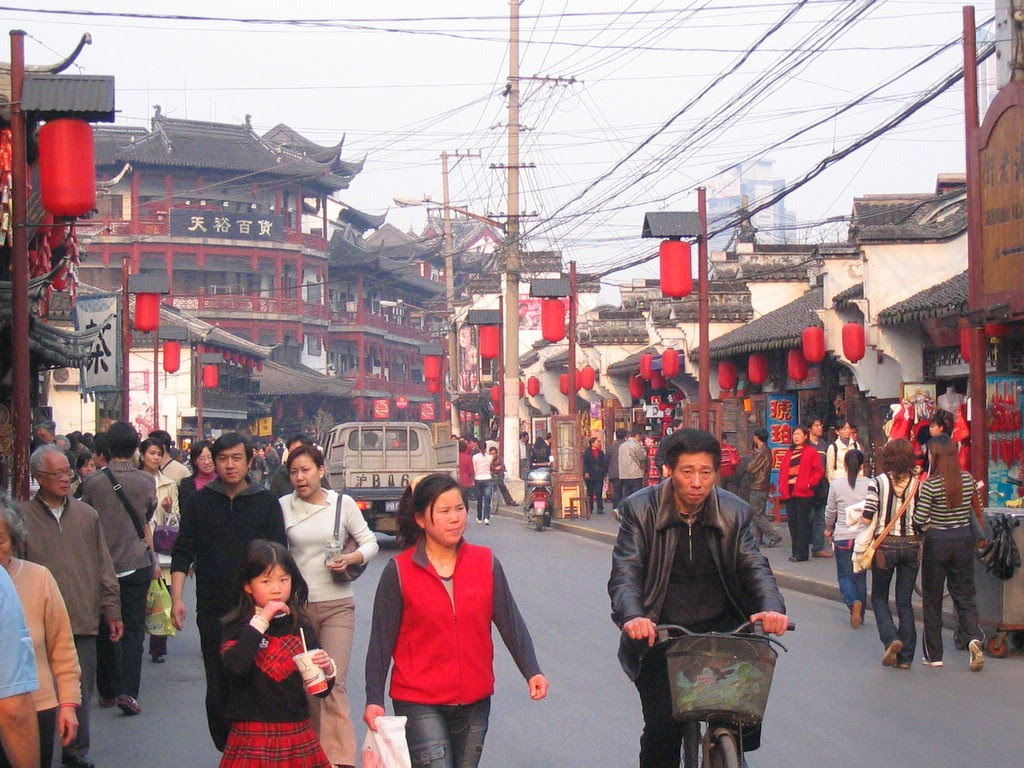 There are about 225 stores here, each designed carefully according to its function. Shops purveying handicraft articles, paintings, calligraphies and jewelry are well-appointed and give you plenty of variety from which to choose what you want. On the eastern part, old shops such as the Tong Han Chun Pharmacy, Lao Tong Sheng Food Store, Wu Liang Cai Glass Shop, De Shun restaurant, take you back to the Shanghai of 100 years ago. In the Chun Feng De Yi Lou teahouse, you can enjoy Yuanbao Tea served with two olives in it. On weekends, the Pingtan (Suzhou Ballads) are performed here too. In the Old Tea House, the owner has on display a collection of fifty cheongsams, traditionally styled ladies dresses, dating from the 1930s. By contrast at the western end of the street is where items of folk culture may be bought. The antique shops, embroidery houses and wonderful fabric shops symbolize the commercial prosperity of the area.
By the way, you can visit Yuyuan Garden which is a famous classical garden next to the Old Street. Here you will find the Temple of the City God, a Taoist temple and Chen Xiang Pavilion, a Buddhist temple are also in Yuyuan Garden Tourism Zone. You can walk to Xiao Tao Yuan Mosque, in which many kinds of Islamic food are provided here on Fridays, the Muslim holy day.