Situated in the southwest of Shanghai, Fengjing Ancient Town is 57 kilometers (about 35 miles) from Shanghai City. Encompassing 2.09 square kilometers (about 516 acres), it has long been known as a typical ancient water town, as well as one of the four most famous towns in the south China. Others which enjoy similar reputations are Nanxun Ancient Town, Wangjiangjing in Zhejiang Province, and Shengze in Jiangsu Province. 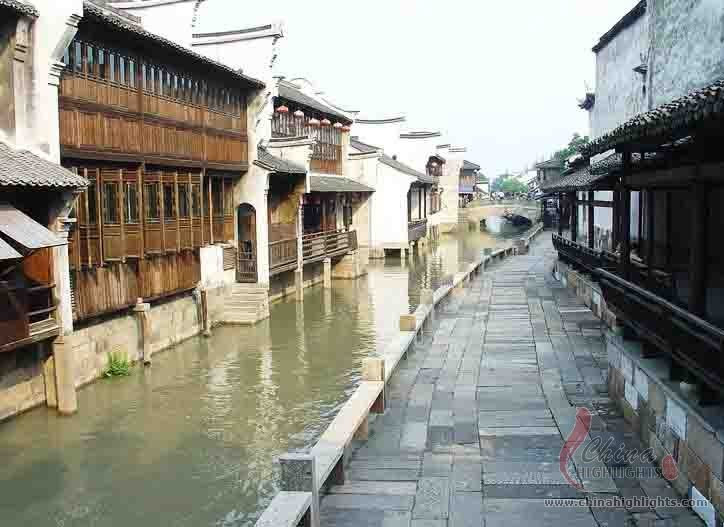 Fengjing Ancient Town has a history of over 1,500 years. Demarcated by the boundary river in its center, it was governed separately by Zhejiang and Jiangsu Provinces from 1430 during the Ming Dynasty (1368-1644).

In the town, one will see many buildings, of which most are of the Ming and Qing style. They are mainly two-story structures of brick and timber with white washed walls and black-tile-covered roofs. Each has wing-rooms, dooryard and walkway. The total area of old residences in the four main streets reaches 48,750 square meters (about 12 acres), and nine locations among these are included in the Shanghai Unmovable Cultural Relics.

With its surrounding water network, the town boasts 52 bridges. Zhihe Bridge, with lichen in crevices of the stones, was built in the Yuan Dynasty (1271-1368). Standing on the bridge, travelers will have a panoramic view of the trees and old houses. One also can see red lanterns hanging under the back eaves, which add a beautiful scene to the bridge at night. Another famous one is Rainbow Bridge, which is also distinctive.

Attracting great numbers of domestic and foreign visitors, Fengjing Ancient Town is worth a visit to find the old culture and customs of China. Strolling on these thoroughfares, visitors can view local people's way of life if they pay heed, even in the tea shops. Visitors also can listen to local operas when there is a performance.

Jinshan Peasants' Painting originated and flourished in Fengjing Ancient Town. With a unique art style, it has had great influence at home and abroad. And it favors Fengjing the "Home of Chinese Folk Painting". In addition, there are many other folk crafts, which are of long standing, such as Blue allover, furniture-carving, kitchen mural, festival lanterns, paper-cuts and embroidery. Besides, the town has been famous for cotton textile since the Ming Dynasty. Cloth produced here owns a good brand in China. Visitors can try to make their own handicrafts in person.

It is worth noting that Fengjing Ancient Town is of diversified religions, which is seldom seen in South China. There are temples of Taoism and Buddhism, as well as Catholic and other Christian churches.

Another specialty in the town is local food delicacies, of which the yellow wine, pork trotter, Zhuang Yuan Cake and Tian Xiang Dry Bean Curd are known as the "Four Treasures of Fengjing".