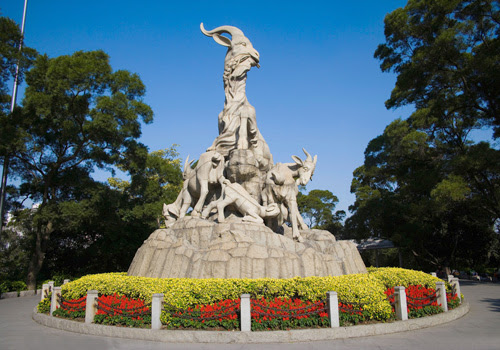 Yuexiu Park is the largest park in downtown Guangzhou. Covering an area of 860,000 square meters (212.5 acres), it is made up of three artificial lakes and seven hills of Yuexiu Mountain; hence the name Yuexiu Park.
It is a perfect combination of cultural relics and ecological tourism, reputed for its pretty water and hills as well as cultural relics. The main places of interest include the stone sculpture of the Five Rams, Zhenhai Tower, the site of the Ming Dynasty City Wall, and Square Cannon Site.

The Five-Ram Sculpture is one of the most famous structures in Guangzhou. It has become the emblem of the city. Legend has it that more than 2,000 years ago, the city was a barren land with people who despite hard work were suffering from famine. One day five immortals in five-color garments came riding on five rams, playing their legendary music. The rams held sheaves of rice in their mouths. The immortals left the sheaves of rice for the local people, gave blessings to the city and left. The rams turned into stone and the city became a rich and populous place. Guangzhou got the name of the City of Rams and the City of Ears. 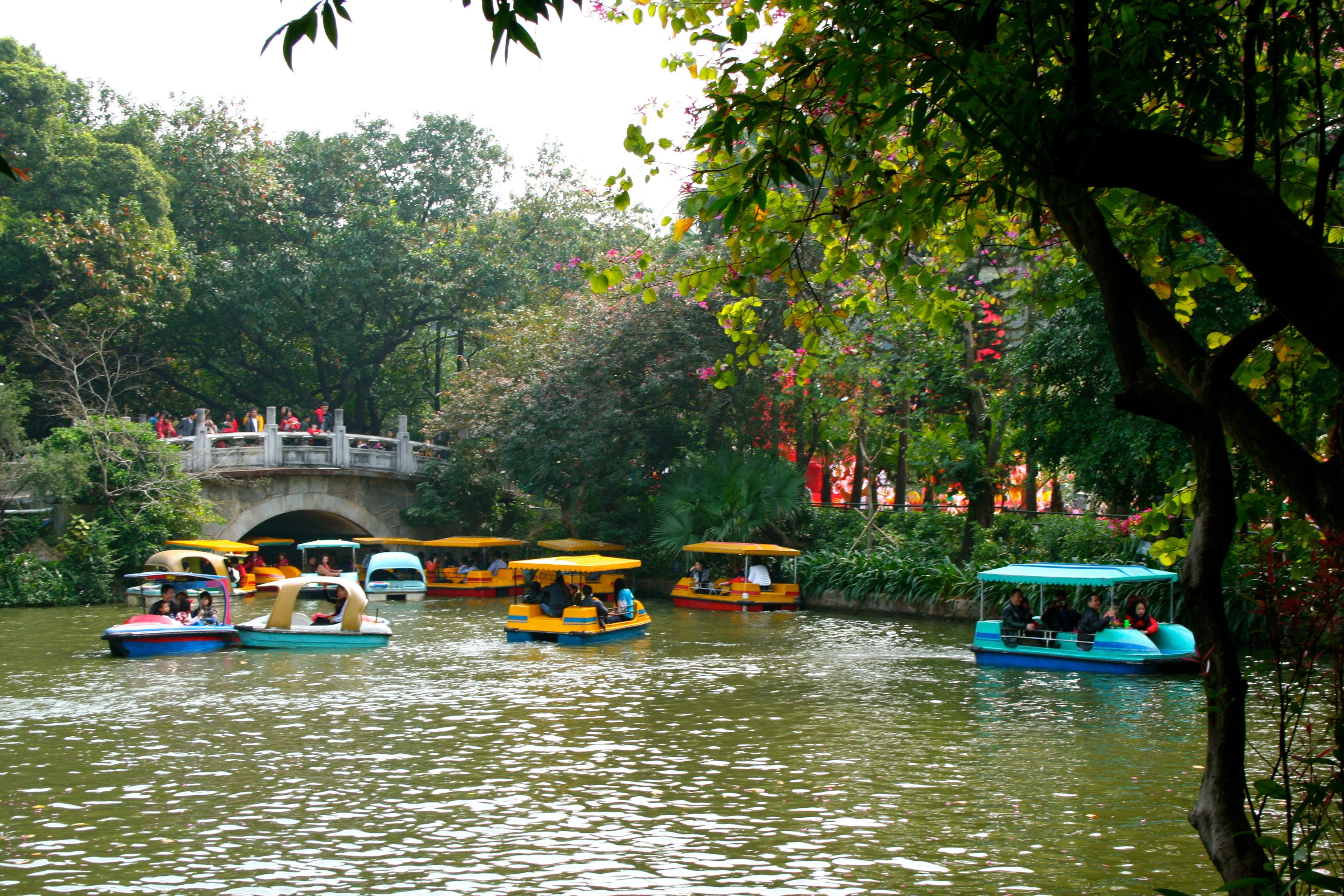 Zhenhai Tower, better known among the locals as the Five-Story Tower, is one of the landmarks of the city. An interesting historical record has it that Zhu Liangzu, Yongjia Marquis of the Ming Dynasty (1368-1644), saw yellow and purple air rising over Yuexiu Mountain and was told by a sorcerer that it was the omen of a new emperor. To subdue this omen, Zhu Liangzu ordered this tower to be built in 1380. Over the past 600 years, the tower has been destroyed five times and set up five times. Now it is the Guangzhou Museum, housing relics and documents showing Guangzhou's history over 2, 000 years. Known as the first tower in Lingnan (South of Nanling Mountain) Area, Zhenhai Tower now is 28 meters (91.9feet) high and 16 meters (52.5 feet) wide. The striking contrast of green glazed titles and red walls makes the tower elegant. While the historical traces create a serene environment, singing birds and exuberant plants add vigor and natural beauty to the park. Three artificial lakes -- Dongxiu, Nanxiu, and Beixiu-- cover an area of more than 50,000 square meters (538,213 square feet). Dongxiu Lake and Nanxiu Lake are tranquil and elegant, inviting painting and sketching artists. Beixiu Lake, surrounded by trees, is open for boating and fishing. What's more, the lakes are connected with arch bridges and decorated with pavilions and corridors in the Lingnan Style. Flower exhibitions are held here from time to time. For nature lovers who can't get to the faraway countryside or forests, the park is an optimum choice with modern conveniences.
As a large comprehensive park, Yuexiu Park provides an amusement park, swimming pool, gymnasium, restaurants, stalls, museum and art museum besides plant and flower viewing area. All visitors find pleasure there.

Tips:
There are five gates to Yuexiu Park, namely the Facet, East, West, North and South Gates. There are many buses at each gate with Metro Line 2 arriving at Facet Gate.