Throughout history, Qinghai Lake has been known variously as the "West Sea" or "Fresh Sea." In Mongolian, the lake is called Kukuruo'er, and in Tibetan, Cuowenbo, both of which means "Blue Sea." Home to the Bei and Qiang ethnic nationalities in ancient times, it was also known as "Bei Qiang Sea".

It is located in the northeastern corner of the Tibetan Plateau, about 100 kilometers west of Xining, the provincial capital of Qinghai Province. During the Western Han Dynasty (206 BC-9 AD), the people called it the "Immortal Sea." It wasn’t until the Northern Wei Dynasty (386-533) and onward that it has been known under its present name of Qinghai Lake. 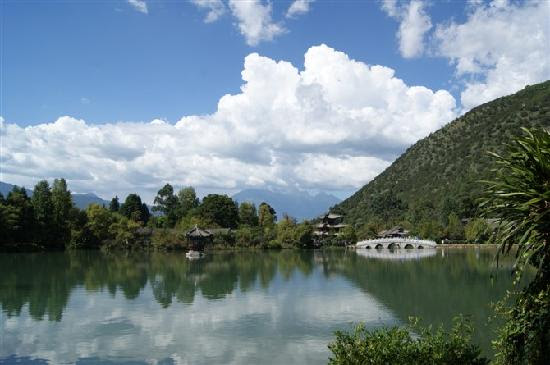 This exquisite lake is even more incredible due to its environment, surrounded by high mountains: to the north stands the magnificent Datong Mountain; to the east, the lofty and majestic Sun-and-Moon Mountain; to the south, the serpentine Qinghai South Mountain; and to the west, the steep and rugged Rubber Mountain. Qinghai Lake lies a breathtaking 3,200 meters above sea level, and with a perimeter of 360 kilometers, it is the largest salt-water lake in China, covering an area of some 4,600 square kilometers.

Qinghai Lake receives its water from 23 rivers that empty into it, and there are 2 additional, albeit quite small, lakes to the east: Gahai Lake, a saltwater lake covering an area of over 10 square kilometers; and Erhai Lake, a freshwater lake covering an area of some 4 square kilometers. Panning in a circle on the banks of Qinghai Lake on a typical summer's day, one sees the deep-green mountains in the distance that encircle a shiny green belt of grass with the bluish lake in the center. Between the mountains and the lake, the land is an open, flat prairie, a perfect pasture for the grazing of yaks, camels, and sheep. As well, one will certainly see flocks of white sheep—and the tents of the herdsmen who tend them—dotting the sea of grass that surrounds the lake. 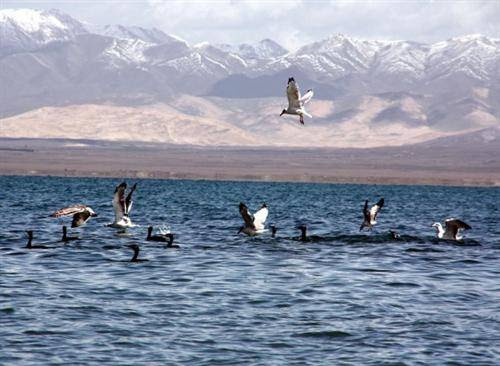