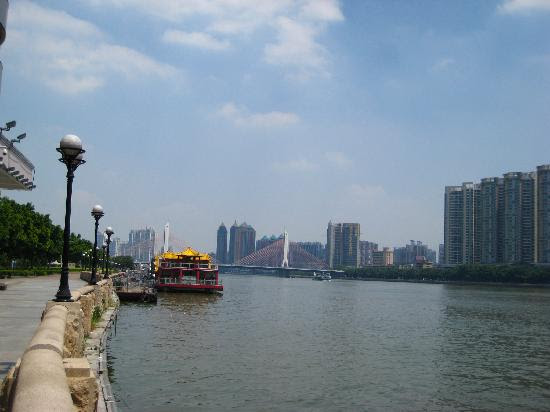 The Pearl River has a length of more than 2,000 kilometers (about 1243 miles) and is the third longest river in China. It is composed of four separate river systems: the Xi River (originating from the Yunnan-Guizhou Plateau), the Liuxi River (originating from Conghua City in Guangdong Province), the Bei River, and the Dong River (both originating from Jiangxi Province). These four rivers join up in Guangzhou, flow for about 70 kilometers, and then pour into the South Sea. The section flowing through Guangzhou City is the 'Pearl River' that most people are familiar with. In ancient times, the Pearl River was called 'The Pearl Sea' for its 2000 meters-wide (about 2187 yards) channel. Later, the channel gradually shrunk, and now it is only 180 meters wide (about 197 yards). Its name is said to derive from a huge boulder in the river bed. This rock, with the name of 'Sea Pearl', is so round and smooth that it looks like a large, shining pearl.
Today, with the modern development of Guangzhou, ten bridges span the river. Along both banks of it, high-rise buildings such as star-grade hotels and modern shopping malls stand in great numbers. Passing through such a prosperous city, the Pearl River, unlike other rivers displaying only natural beauty, boasts the type of scenery that only belongs to a modern urban area. When night falls, it immediately starts to look more interesting. The bridges, decorated by colorful shining neon lights, seem like fantastic rainbows spanning the river. On both banks, the nightlife of the city awakens. It becomes gorgeous with a blaze of lights. The water in the river reflects the magnificent lights in shimmering patterns. Cruise ships full of tourists ply the waters at a leisurely pace. Visitors enjoy the gentle cool breeze and soak up the colorful night view. The night scene there is almost on a par with Victoria Harbor in Hong Kong. Guangzhou Pearl River
Pearl RiverDuring the day, people can walk the 'Scenery Corridor' alongside the river, enjoying the beautiful water scenes. The corridor, about 23 kilometers (14 miles) long, is actually a dike built especially for appreciating the scenery.  In addition to the attractive water scenes, people can also find historic and artistic buildings in Guangzhou including the Huangpu Military Academy (the first military academy in Chinese history), the Xinghai Concert Hall (which boasts an unusual elegant appearance), the Historic Site in Shamian (which includes hundreds of buildings in different architectural styles), and Tianzi Dock (which was used for greeting officials hundreds of years ago).
The Pearl River is like a ribbon that connects the historical sites and beautiful scenery along it and shows people both the modern culture and the historical legacy of Guangzhou City. 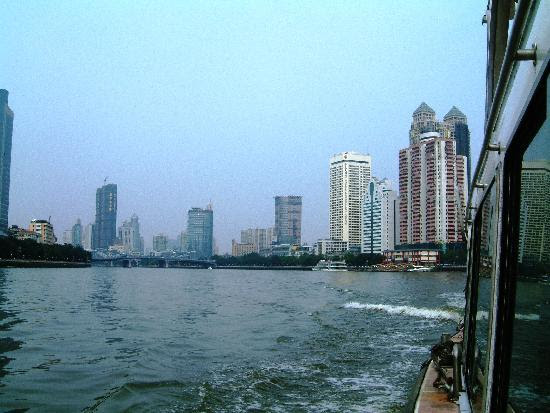