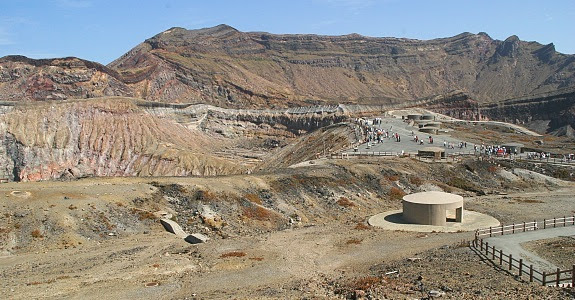 Mount Aso (阿蘇山, Asosan) is an active volcano in the center of Kyushu. Its ancient caldera ranks among the world's largest, with a diameter of up to 25 kilometers and a circumference of over 100 kilometers. In the center of the caldera stand the mountain's active volcanic peaks, including Mount Nakadake, whose spectacular crater is easily accessible to tourists by toll road or ropeway.
Note that the crater area is often partially and sometimes completely closed off to visitors due to poisonous volcanic gases or the risk of volcanic activity. So, make sure to check the volcano's current statebefore traveling there. Even when the area around the summit is open, gases can be intense, and people with respiratory problems should refrain from approaching the crater.

Not far from the Nakadake crater, Kusasenri-ga-hama is a grass covered plain with grazing cows and a few horses. Horse riding is possible from early March to mid December. On the opposite side of the road stands the Aso Volcano Museum with explanations about the volcano.
Komezuka is a small, beautifully shaped volcanic cone on the northern slopes of Nakadake. There are pleasant walking trails in the vicinity (but not to the top) of Komezuka, however, easy access by public transportation is not provided. 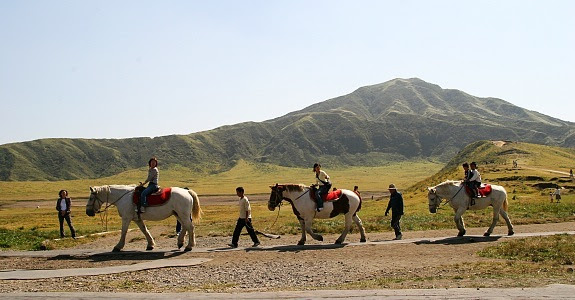