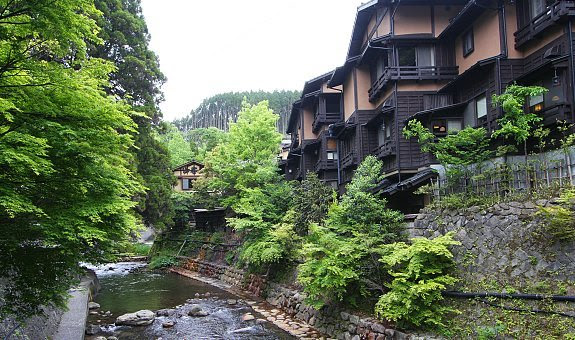 Kurokawa Onsen (黒川温泉) is one of Japan's most attractive hot spring towns, located in the middle of Kyushu about 20 kilometers north of Mount Aso. Well coordinated efforts by the town to maintain a pleasant, traditional atmosphere have kept Kurokawa free of the massive concrete hotels, neon advertisements and loud colors that are encountered in many of Japan's other resort towns.
Instead, Kurokawa's townscape is dominated by natural colors and materials, wooden buildings, earthen walls, stone stairs and a river flowing through. The town center, located in a forested valley, is compact and easily explored on foot, except for a few ryokan which are located less centrally.
The town's lanes are lined by ryokan, public bath houses, attractive shops and cafes, a small shrine and bridges that lead over the river directly to ryokan entrances. A walk through town is particularly enjoyable in yukata and geta sandals provided by one's ryokan. An information center, where maps and other information can be obtained, is also found in the town center. Kurokawa is not only known for its attractive town, but also for the outstanding outdoor baths (rotenburo) of its ryokan some of which are located right besides a gushing river or impress by their large sizes. The larger baths with good views tend to be located a little bit outside of the town center, while some of the more central ryokan attract with smaller but historic baths, which were already enjoyed by the feudal lords of nearby Kumamoto Castle. 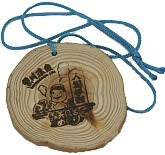 While staying guests naturally have the opportunity to enjoy their own ryokan's baths as often as they wish, it is also possible for overnight visitors and daytrippers to explore any other bath in town during daytime and engage in a so called Rotemburo Meguri ("tour of outdoor baths").
For this purpose, a wooden pass (tegata) is sold for 1300 yen, providing admission to the baths of three different ryokan of one's choice (valid for up to six months). It is available at the information center and the over twenty participating ryokan. Alternatively, the cost is 500 yen per bath. Inquire at the information center for eventual closures on the day of your visit.
In addition to the ryokan baths, Kurokawa has two very simple, unmanned public bath houses with small indoor baths: The Jizoyu public bath in the very town center has small, gender separated baths (200 yen per person), while the Anayu public bath house, a few steps up along the river, has a small, mixed bath (100 yen per person).
Below is a list of some of Kurokawa's best baths: