It is said that if there should be wonderlands on the earth, Jiuzhaigou Valley must be one of them. There is no equal elsewhere that has sceneries and fables of dreamlike eloquence, or natural purities like a fairyland as it.

Jiuzhaigou Valley is located in Nanping County, 450 kilometers (about 280 miles) to the north of Chengdu City. Its name is due to the existence of nine stockaded villages of Tibetan origin, and it is always regarded as a holy mountain and watercourse by the Tibetan people.

It is a great masterpiece of nature having dreamlike scenery, which combines blue lakes, waterfalls, verdant forests, snow-covered mountains, and the folk customs of the Tibetan and Qiang peoples. Legend has it that long long ago the deity of mountain named Dago had a crush on the goddess Semo, and he gave a mirror that was made from wind and cloud to the goddess. However, the devil appeared and made trouble to Semo. Inadvertently, Semo broke the mirror into 108 pieces, which fell down to the earth and then turned to 108 colorful lakes. The lake is also called Haizi by local people.

In addition to the dreamlike sceneries, there are numerous flora and fauna in the scenic area. The natural forest covers an area of nearly 30,000 hectares (about 74,132 acres), including 2,576 higher plant species (24 species of national protected plants) and over 400 lower plant species (212 species of algae). The diversity of flora has provided a good environment for wild animals.  There are 170 species of vertebrates, 141 species of birds and 17 species of rare animals. Among them the first rank has giant pandas, takins and golden monkeys and the second rank has lesser pandas, marmots, and blue sheep.
This region covers more than 600 square kilometers (about 230 square miles). Shuzheng Valley, Rize Valley and Zechawa Valley are the three main valleys, but the sceneries are far more than you expect. There are Panda Lake Waterfall which has the longest drop in Jiuzhaigou Valley and freezes to a crystal world in winter, the giant calc-sinter beach Pearl Beach, the Arrow Bamboo Lake that has a large area of bamboo, the favorite food of pandas, and Swan Lake where swans inhabit . 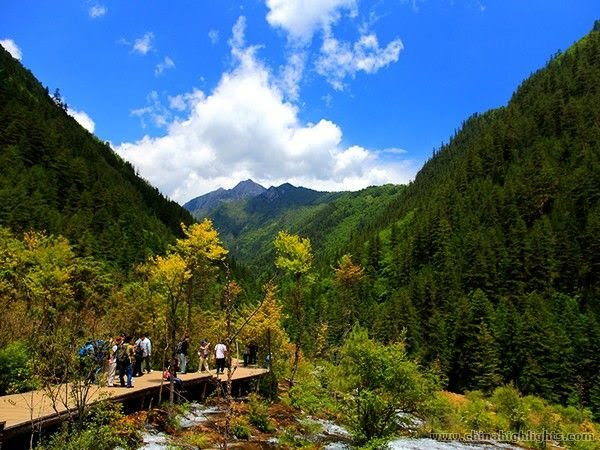