Beiyue Temple (simplified Chinese: 北岳庙; traditional Chinese: 北嶽廟; pinyin: Běi Yùe Mìao; literally: "Northern Peak Temple") is a Daoist temple located in Quyang, Hebei Province, China. The temple was used to make sacrifices to Mount Heng by the emperors of the Song Dynasty while the mountain was occupied by the Liao Dynasty. The Dening Hall of the temple is the largest, earliest and one of the most important extant wooden buildings built in the Yuan Dynasty. The temple also contains three gates, an octagonal pavilion and many ancient stelae. 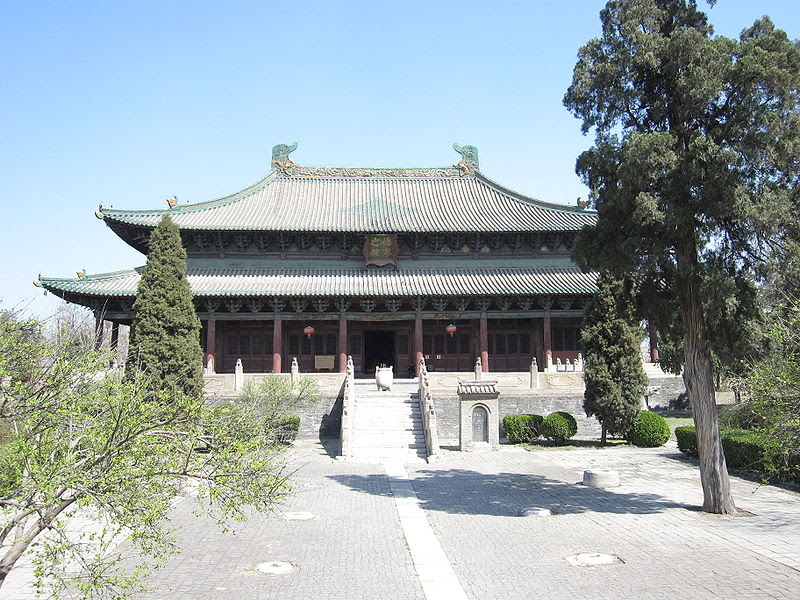 The Beiyue Temple was first established either during the Northern Wei Dynasty (386-584) or the Tang Dynasty (618-907), but the site may have been in use as early as the 2nd century BCE of the Han Dynasty.[2][3] The temple has been rebuilt twice, first in 991 after having been destroyed by the Khitan during the 950s, and then in 1270. According to a surviving image of the temple dating from a local history of Quyang written in 1672, the temple had by this time achieved its present layout.[4]
During the Song Dynasty, Beiyue Temple was used as an alternate site to make sacrifices to the Northern Peak, Mount Heng, one of the sacred mountains of Daoism. During this time, Mount Heng was controlled by the Liao Dynasty (916-1125). In order to maintain political legitimacy and receive Daoist support, Beiyue Temple was chosen by the Song Emperor as the location to make sacrifices to Hengshan. Even though the mountain was not controlled by the Song, they believed that a 'geomantic vein' that would direct their sacrifices could be cut through enemy controlled territory and reach it.