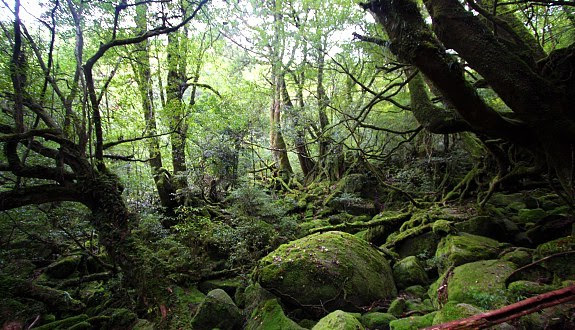 The Shiratani Unsuikyo Ravine (Shiratani Unsuikyō) on Yakushima is a lush, green nature park containing a number of the island's ancient cedars such as the Nidaiosugi, Kugurisugi and Yayoisugi, the park's most accessible yakusugi which can be reached in a 15 minute walk. Shiratani Unsuikyo is a popular destination to see the forests without much strenuous hiking.

The park offers a network of well maintained hiking trails that run along the ravine. The recommended circuits vary in length from one to five hours long, but you are free to wander around and choose your own route among the paths. The trails vary in difficulty from a historic footpath built in the Edo Period to more developed ones paved in stone and wood. English signs are provided throughout. 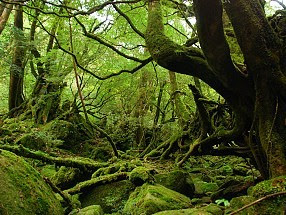 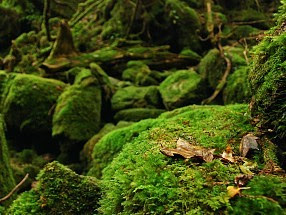 The inspiration for Mononoke Hime.


One of the main attractions of Shiratani Unsuikyo is a part of the forest that served as the inspiration for the Stugio Ghibli animated film Mononoke Hime (Princess Mononoke). Oga Kazuo, the lead artist for the film, spent lots of time here working on sketches for the movie's forests. The mountains of the film were further inspired by Akita Prefecture's Shirakami Sanchi Mountains.

The small grove is at the far end of the park on the trail to Tsuji Toge Pass. If you continue on this trail, it will eventually lead you to the Jomonsugi by way of meeting up with the Anbo Trail about halfway to the entrance of the Okabu Trail. The round trip to the Jomonsugi takes approximately twelve hours and is more difficult than the route that starts at the Arakawa Trailhead. 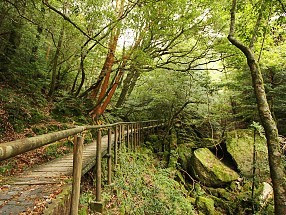 Boardwalk trail through the forest 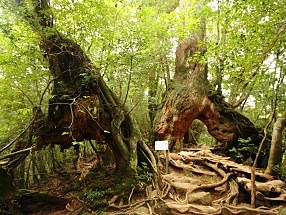