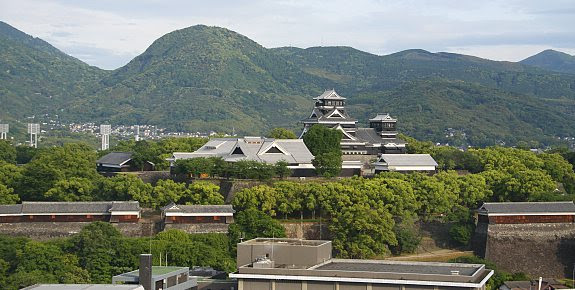 Kumamoto Castle
Kumamoto Castle is one of the most impressive castles in Japan. With large castle grounds and a variety of buildings, Kumamoto Castle offers its visitors one of the most complete castle experiences in Japan. Only a few structures have survived the centuries since the castle's construction in 1607 intact. The castle keep and most other buildings are modern reconstructions, but the reconstructions are mostly of a high quality and new buildings are continually being added. With about 800 cherry trees, the castle becomes a popular cherry blossom spot usually in late March and early April.
The construction of Kumamoto Castle in the early 1600s took seven years, and it was designed by the feudal lord (daimyo) who ruled the area, Kato Kiyomasa. Kato was an experienced warrior, and he used his knowledge to build fortifications that were highly regarded for their strategic effectiveness. Less than 50 years after its construction, the castle and surrounding area were taken from the Kato clan and given to the Hosokawa clan which ruled the area from Kumamoto Castle for the next two centuries.
A few years after the Meiji Restoration (1868), the castle played a pivotal role during the Seinan Civil War, during which the famous samurai Saigo Takamori led an uprising in Kyushu against the new government. Kumamoto Castle was the main garrison of government troops in Kyushu, and Saigo attacked the castle in early 1877. Despite being outnumbered and losing many buildings, the government forces were able to withstand Saigo's two month siege, forcing the rebel forces to retreat.

Unfortunately, the original castle keep burnt down in 1877 just before the siege. In 1960 a ferro-concrete reconstruction was built that recreates the building's outward appearance. Inside the building, however, there is a modern museum with displays on the castle's history and construction rather than a reconstruction of the original interior.
The castle keep has two towers, a main tower with six stories and a small tower with four stories. Great views of the castle grounds and surrounding city can be enjoyed from the top floor of the main tower.

An extravagant room in the Honmaru Goten Palace
A particularly unique attraction of Kumamoto Castle is the reconstruction of the Honmaru Goten Palacebuilding, which was created in celebration of the castle's 400th anniversary and was opened to the public in 2008. The original palace building was much larger and included the living quarters of the daimyo, but unfortunately it was one of the many buildings destroyed during the Seinan Civil War.
The current palace building was constructed with original materials and methods. Within the building visitors can see accurate recreations of the opulent surroundings in which the daimyo would receive guests. There are also interesting displays regarding the building's reconstruction.
Besides the castle keep and palace building, Kumamoto Castle features impressive stone walls and moats, as well as several turrets and storehouses, many of which can be entered. The Uto Turret is one of the few structures that survived the siege of 1877, and dates back to the period of the castle's construction. There is also a unique underground passage that leads to the palace building and a former residence of the Hosokawa clan about 500 meters northwest of the main castle grounds.