This museum has perhaps the most dramatic location of any in the world being situated on a hill at the end of the Benjamin Franklin Parkway overlooking the Schuylkill.  The building was constructed of a golden color stone in the 1920s and recalls the architecture of ancient Greece.  Alas, the installation of elaborate multicolor sculpture for the triangular pediments was cut short by the Great Depression. 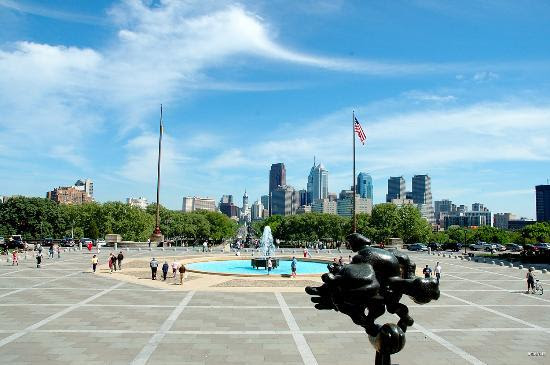 By agreement, the museum exhibits works from the Middle Ages to Modern period.  Ancient works are to be found at the University of Pennsylvania Museum.  The museum also operates several historic houses in Fairmount Park and the nearby Rodin Museum.  Recently, the museum acquired the Perlman Building to the north of its hill.  Work is underway to expand the museum by exploiting the underground area of the hill and the forecourt near the front steps made famous in the "Rocky" film.
The museum is arranged historically and features paintings mixed in with period rooms and decorative art.  The illumination is provided by electric "skylights" and windows.  A giant sculpture of Diana, a former wind vane from the original Madison Square Garden in New York City, dominates the grand stair hall.
The museum frequently has special exhibitions that require advance ticketing in additional to the general admission.  There is a cafeteria and a more upscale restaurant in addition to a gift and bookstore.
The Philadelphia Museum of Art might be rated as the number two museum in the United States after the much larger Metropolitan Museum of Art in New York City.
The #38 SEPTA bus, which runs from 5th to 13th along Market Street, and 15th to 20th along JFK Blvd. in Center City, goes up the hill to the rear entrance of the museum.